The story of Johnson Blamah

Johnson Blamah aged 32 years is a member of the Gbarma Community Based Organization. He is one of the few young men in Gbarma who have shown a passion to support women's leadership, participation, and inclusion.  He describes himself as a champion of women's and girls' rights. He believes that if all men stand for the rights of women, society will be equal and there will be no violation.

“I believe in equality and I know that God created men and women equal. It is our society that decides to promote only men and boys and leave out women,” says Johnson

In Liberia patriarchy is entrenched in every community. In most cases, boys grow up emulating what they see their fathers practicing including unfairly treating women and girls. Growing up in communities where traditions and cultural practices that do not promote women participation and leadership shaped the way Johnson viewed his world. It was normal for him to see boys and girls leaving school for years to be part of the Sande and Poro Bush. He noted in most cases, boys who undergo the initiation process often do not take long. They would come back to go to continue with their education and other engagements including participation in community meetings where decisions were being made. His experience changed when he joined the CBO in Gbarma where he had an opportunity to participate in training conducted by ActionAid and Domafeign focusing on HRBA and SRHR. He started realizing that what was happening was not good and he and his friends had an opportunity to change that through awareness creation. Below he shares his experience and why he decided to challenge his family and other community members to at least allow girls to be in school first and also ensure that initiation would be voluntary.

“I grew up in a community where men did not respect women. Even older women were making decisions on behalf of girls. Girls were being forced to attend the Sande bush school and missing on years of education. A good number would not even return to school. When I joined the CBO, my mind got opened up and I started to realize that our cultural practices violated women's and girls’ rights. I decided to join other members of the CBO in raising awareness. Though we faced a lot of resistance, I’m happy that the practice has stopped in our community. I want to thank ActionAid and Domafeign for giving us a voice to change things,” narrated Johnson.

Johnson became a member of Gbarma CBO in 2020. Like other members of the CBO, he has attended various trainings organized by Domafeign as part of the project. The trainings have helped them to understand human rights issues and they have used that information to reach out to community leaders and traditional people so that they could end FGM in Gbarma.  Some of the trainings that have been carried out include SRHR advocacy, Economic Literacy, Budget and Accountability for Governance (ELBAG), feminist leadership, SHEA, and Safeguarding. It is as a result of such training that young men like him have taken the courage to challenge bias against women and girls and are now women’s rights champions in their communities.

ActionAid continues to build the capacity of young people to take leadership as well as champion equality at all levels. AAL has both male and female-led CBOs and the male-led CBOs have helped promote positive masculinity. Year 3 of the JEC project has seen the increased engagement of young people where CBOs have reached to other communities outside the project area. 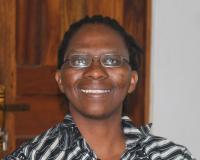